=Studies have shown that millennials are the “cynical” generation, that very few believe other people can be trusted.

Yet when it comes to advertising, the opposite is true: According to a new Clutch survey of 1,000 consumers across the U.S., millennials trust advertising more than older generations.

About 55 percent of millennials trust advertisements to be honest in their messages; 44 percent of Baby Boomers say the same. That number is more dramatic when looking at traditional advertising (TV and print) vs. newer forms of advertising (online and social media). 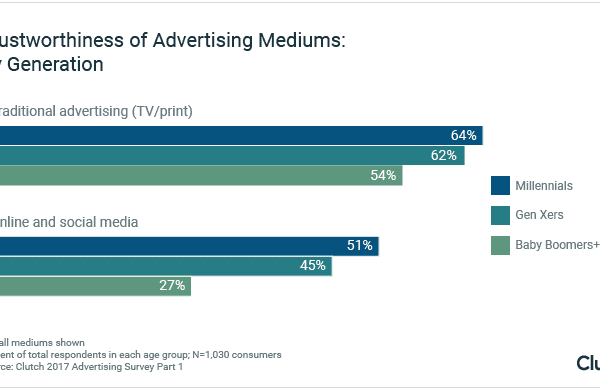 “Baby Boomers are already set in their ways in regards to the brands they prefer, so an ad might not convince them to buy something or go for something,” Bandwidth Marketing Managing Director Rob Albertson said. “There’s an aspect of spontaneity in millennials that would cause them to try something.”

TV is the most influential advertising medium for all generations, but millennials are more likely than Baby Boomers to make a purchase after seeing or hearing an advertisement on all mediums. 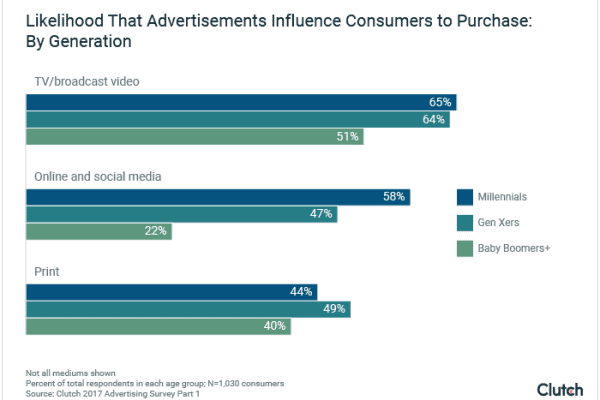 About 90 percent of all consumers are influenced by advertising, but as millennials develop more buying power, companies would be smart to aim advertisements toward them.

Clutch’s research shows that millennials are more influenced by advertising because they are more spontaneous and open to trying new products and brands, whereas older generations already know their preferences and are less likely to try new things.