The Times They Are A-Changin’

A documentary about journalism might not seem like edge-of-your-seat material — you’re thinking white guys on computers, right?  But Page One: A Year Inside The New York Times, is gripping — a spirited defense of traditional print media in its most dire hour.
Page One follows the goings-on of the newsroom, casting media reporter and colorful personality, David Carr, as the main protagonist defending journalism against bloggers and new media types. 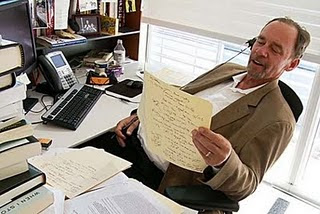 Carr is actually far from a luddite. He calls himself a ‘digital adopter’ while at the same time recognizing that derivative news sources such as blogs and the Huffington Post can’t exist without and can’t replace rigorous, original reporting.
Page One makes clear that journalism as a public resource is what’s at stake — but it’s also a classic tale of an older entity struggling to adjust to new markets and resources.
TV Guide transformed into an online fan resource; AOL is trying to sell ads instead of dial-up portals.  Can the Times, and the traditional news industry in general, make the leap where the FREEconomics have changed the field?  And if they don’t, will the blogs and aggregators in essence kill off the host organism that feeds them?
David Carr believes the Gray Lady can keep shining, beyond just using new hair dye.
He calls newspapers “branded information put together by people you trust.” The brand, if valuable enough, can live on even if the physical product, delivery method, and business model change.
The Times put up a pay wall in March, the first step in what might be a future largely supported by readers instead of ads or subscriptions.  If the Times is going to be asking for dollars, Page One is  a pretty persuasive infomercial.
http://blogs.indiewire.com/theplaylist/archives/watch_trailer_for_journalism_documentary_page_one_inside_the_new_york_times/
http://www.slate.com/blogs/blogs/browbeat/archive/2011/01/28/david-carr-page-one-and-the-future-of-the-new-york-times.aspx
http://www.thenewsgallery.com/2011/06/page-one-ny-times-documentary-opens-for.html